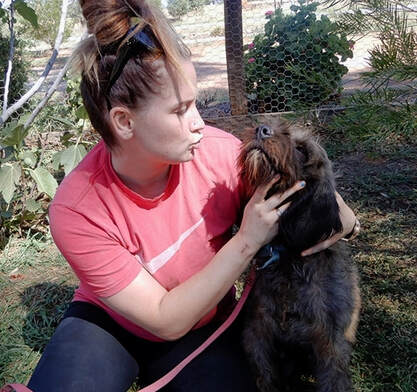 F1 Cobbeagle Rutlands Jedda
As we all grew to love and appreciate Jedda more, it struck me how many people had emailed me to ask if it was true that miniature Cobberdogs were too highly strung to make suitable Therapy Dogs.  Apparently they were being told that by some other Cobberdog breeders.

If it was true..This was something that needed attention!

​I also remembered why it is that Beagles are  the breed of choice used in experimental laboratories, a practice that I detest.  The reason given is that they are small but not too small, and so forgiving;  placidly accepting without complaint  the inhumane treatments that they are subjected to, which makes the 'work' of the research scientists much easier.
So I began to wonder if this accidental mating could have actually happened for a reason, to get me thinking.  I hoped to work very closely with the MDBA but  they were not ready.  I had 2 choices-either abandon my strong hunch, or go it alone. After all,  I decided without my hunches the Australian Cobberdog would not exist today.  I do NOT advocate random crossing of ACD and Beagle, no, not at all!  Clara was one of a kind as Beagles go and Jasper's bloodlines are strong, healthy and prepotent.
Rutlands Australian Cobbeagles are extensively DNA health tested  for lurking inherited diseases just as are my Australian Cobberdogs.
Now is the opportune time to work on this breed development while the ACD Stud Book is still open.    It's my hope that the MDBA will  embrace these brand new fresh bloodlines tested and true, into the Australian Cobberdog - a calming influence - especially for the Miniatures and small Mediums.
Hundreds of thousands of pure bred Beagles are tormented in laboratories across the world because of their gentle accepting nature and low stress levels.
These are just some of the atrocities imposed upon thousands of gentle Beagles across the world.  Beagle puppies are even bred and sold by unscrupulous breeders precisely for this purpose.
Back